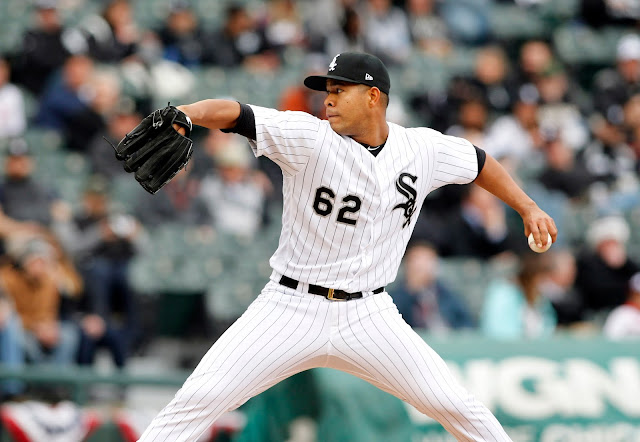 Jose Quintana wasn't supposed to be here to serve as the White Sox Opening Day starter. Using Rick Hahn's own words, if he had his druthers, Quintana would have followed Chris Sale and Adam Eaton out the door, returning his own plethora of prospects, giving the rebuilding effort an even bigger boost.

As we've gone over before, however, Jose Quintana is still here. In all likelihood, Jose Quintana is going to be here for at least a couple of more months. This is a bit of a worrisome proposition for the White Sox and White Sox fans. While Quintana's trade value will still be incredibly high this summer, and even again next winter, there are risks involved when holding on to a trade asset. Particularly one that's a pitcher.

The greatest fear, of course, is that Quintana suffers an injury. The other fear is that he regresses. Now, given his track record, there's no reason to spend a significant amount of time worrying about either of these possibilities. There's a large sample size to work with, and Quintana is one of the most consistent starters in all of baseball.

But the fear is going to be here until Jose isn't.

His Opening Day performance did absolutely nothing to help quell those fears, either.

Opening Day started a day late, and it was over early, as Jose Quintana allowed five runs in the second inning, and finished the day allowing three homers and six runs over 5.1 innings. He also walked more hitters (three) than he struck out (two). By any measure, it was a really bad start. Particularly when comparing it to the Quintana we've all come to know and love.

It was to Cheslor Cuthbert during the third inning of a game against the Kansas City Royals ... on June 11. Ironically enough, Quintana would allow three homers in that game -- two to Cuthbert -- as the Sox would go on to lose 4-1.

Now, there's good and bad to take away from these facts. The bad is obviously the fact he gave up three dingers to the Tigers on Tuesday. The good is that he's had these performances before. In fact, this was the fifth time in his career that Quintana allowed three homers in a single game, as he did it twice last season.

And he still went on to have the seasons that make him such a valuable asset to the White Sox, and eventually, somebody else.

So it's important not to overreact to one awful start. Everything tends to get a bit blown out of proportion on Opening Day, but the truth is that Quintana just did not have his location on Tuesday. He was either missing way out of the strike zone or directly in the heart of it. When you do that, well, you're gonna get hit hard, and you're going to walk guys.

Which is precisely what happened against the Tigers.

Odds are he'll make his second start of the season this weekend against Minnesota and be the guy we've all come to know and love.

But even if he does, the fear will still be here. We're all just going to have to figure out a way to live with it.
Jose Quintana