How Strict A Platoon Should The DH Platoon Actually Be? 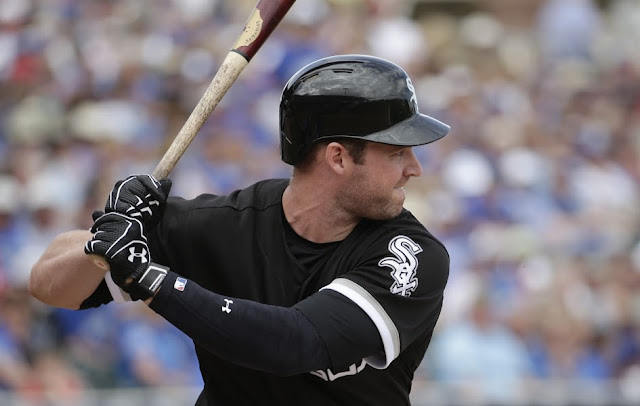 When the White Sox originally released their lineup for Wednesday's game against Cleveland there weren't many surprises in it. Leury Garcia getting a start in center over Jacob May was the only actual change from the norm, and it was an understandable one.

While May has been solid in center, he's also hitting .000/.125/.000 through six games. Considering the White Sox have scored 23 runs this year, and 11 of them came in one game, the offense could use whatever kind of boost -- however negligible -- it can get.

What wasn't a surprise was seeing Cody Asche at designated hitter. The White Sox are facing a righty in Danny Salazar, and Asche is one of the few lefties on the roster. It's clear at this point that Rick Renteria is going with a platoon at DH, but plenty of Sox fans -- including myself -- are wondering just how strict of a platoon this really needs to be.

After all, if you're ready to sit May a day, why have faith in Asche at this point? His .077/.143/.077 line isn't much better than what May's giving you. Meanwhile, the other half of the platoon, Matt Davidson, has done pretty well in limited at-bats this season.

Now, it turns out that Davidson will also play on Wednesday night, as he took over Todd Frazier's spot at third base after Frazier was scratched with the flu. Still, the idea of Davidson starting at DH against righties sometimes is one that deserves real consideration for a couple of reasons.

1. The Platoon Advantage Isn't Really There

Matt Davidson doesn't have a long history in the Majors, as he now has a whopping 99 career plate appearances to his name. That's roughly 1,200 fewer than Asche has, so we don't want to take much away from the numbers at this point due to the sample sizes, but there are some numbers that might surprise you.

First, we'll look at Asche, who to this point has been a sub-replacement level player in his career. As a Major Leaguer, Asche has hit .238/.296/.387 in his career against righties. Trying as hard as we can to glance past how awful those numbers are for a guy that's considered a "designated hitter," let's compare them to how he's performed against lefties.

Against southpaws, Asche actually hits .242/.300/.358. So while he has less "pop" against lefties, he actually hits them better, and gets on base more often, albeit slightly on both accounts.

Now let's look at Matt Davidson, and again, we have a very limited sample here. Regardless, Davidson has hit .281/.378/.438 against lefties. While that slugging percentage is low, the first two numbers scream "useful Major League hitter man." How about against righties?

Well, Matt has hit .255/.339/.545 against them. So his average and OBP are significantly lower but look at that jump in the power numbers. Davidson also has four career home runs in the Majors, and all four of them have been hit against righties, including the one he hit this season.

While you don't want to put too much into the numbers, at this point they actually indicate each member of the team's DH platoon might be better off facing on opposite ends of the platoon.

2. Asche Has No Long-Term Value To The Team, Davidson Might

Asche is less than a year older than Davidson, but he's had a much longer big league career. One that hasn't shown much reason to be optimistic about him becoming a valuable player to anybody trying to win games. He's a placeholder on a rebuilding team right now. A guy to take up space this season while prospects mature down on the farm.

Either way, when the White Sox are ready to actually compete again, Asche isn't going to have a place on your roster.

He's also 26, but he won't be eligible to be a free agent until 2023. He also hasn't had a sustained chance to prove his previous prospect pedigree. Which means that even if the odds aren't great, there's at least a non-zero chance that Davidson could prove to be a valuable player on your team when you're actually trying to win. Whether it's as a full-time player or just a bench piece, the potential is still there for it to happen.

So why not give Davidson more of a chance to prove himself? There is simply no better time to give him a shot than in a season in which winning isn't the priority. I'm not saying abandon Asche completely, because the role he's serving is still one that exists, and somebody needs to fill it for now.

But Davidson should probably start getting some starts against righties. There simply isn't enough of a sample size to assume he's only going to be able to hit lefties, and he has a higher upside than Asche does at this point in their careers.