The Week That Were In White Sox: What Are We To Make Of James Shields? 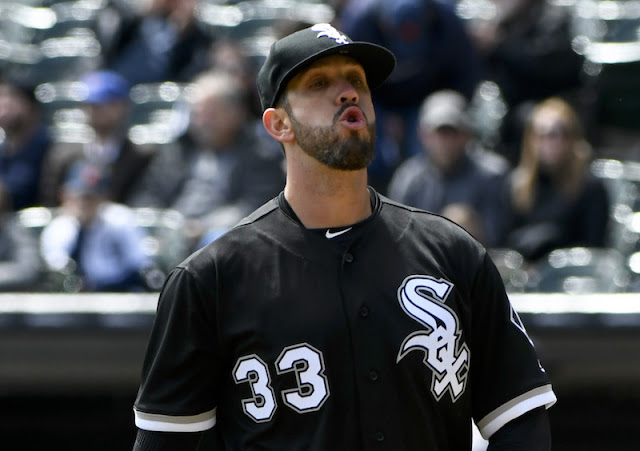 The Week That Were In White Sox is meant to be a weekly look back at the last week in White Sox baseball. I say it's meant to be because I can't guarantee it'll run every week because I can be quite lazy sometimes. So, you know, don't set your watch to it. Just know I'll try to get it up every week. Unless I don't.

James Shields is off to a terrific start. Or is he? It certainly looks that way on the surface, particularly compared to what he did last season. Shields has started three games so far this year, and he's 1-0 with a 1.62 ERA. On Sunday against the Twins, he had his best outing of the season so far, going six innings, and allowing only one run on an inside-the-park home run by Brian Dozier. He also struck out five hitters.

Of course, those numbers can be misleading, particularly this early in the season. What happens when we look a bit below the surface?

Well, we start to see some reasons to believe that this is all going to come crashing down at some point. Again, we're still dealing with a limited sample size, so we shouldn't put too much stock in anything yet, but there are some worrisome signs.

We'll start with the good news. Shields hasn't lost any velocity. Every single pitch he's throwing this year -- save for the eephus, which is a wonderful new addition -- has the same velocity as it did last year. Of course, it's April. Whether or not Shields has that velocity in July or August remains to be seen, but still, it's better to have it now than for it to already be down.

The problems come with the control and batted ball numbers.

Shields has been walking a lot more hitters the last three years than ever before and considering his lack of swing-and-miss stuff, that's problematic.

To make matters worse, Shields has a groundball rate of 27.9% this season, which is well below his career rate of 44.2%. He also has a flyball rate of 58.1%, which is miles above his career rate of 36%. Now, both of these numbers are due to balance out over the course of the season, but considering the best pitch in Shields' arsenal throughout his career has been his changeup, it's a little scary to see so many fly balls being hit off him.

Especially when you realize how many of those fly balls end up as home runs.

All of this is leading to Shields having an FIP of 5.15 with his 1.62 ERA. Remember last season when Mat Latos had a ridiculously low ERA in April while his FIP was telling us the reality check was going to come?

Well, James Shields could easily be this year's Mat Latos. He's off to a great start, but don't expect it to continue.

Derek Holland, on the other hand, is showing more reason for optimism. Though he's also got plenty of warning signs to go with his strong start. Holland has made two starts this season and has an ERA of 1.50 as he's allowed only five hits in 12 innings. We've also seen the slightest of upticks in the velocity on both his fastball and slider. This could be a sign of him arm getting stronger as he recovers from injuries, though it's important to remember that while Holland's fastball is at 91.9mph right now, he hasn't been touching 94 since 2011, so there's a limited ceiling here.

He's never been a strikeout pitcher, and this season is no exception. His K-rate of 18.4% is very much in line with his career average, but the good news is it's higher than it has been at any point since 2013. Still, celebrating a K-rate of 18.4% would be like celebrating a C-minus over a D-plus. Sure, you didn't fail, but you're still one of the dumb ones.

Another worrying sign is that Holland is giving up more fly balls and fewer ground balls than he usually does. Also like Shields, the sample size is very small. In fact, Holland's sample is smaller than Shields as he won't make his third start until Monday night in the Little League park known as Yankee Stadium.

And I'm worried about this start.

Holland has a flyball rate of 45.5% this season, and he's yet to give up a home run. The law of averages dictates that he's going to give up some long balls soon.

Still, even if that's the case, if he can just stay healthy and continue to look more like a solid back-end of the rotation option, he could have trade value this summer. So I'm not asking Holland to keep up his current pace.

The losses are going to come. As I write this the White Sox are 6-5 and 1.5 games out of first place. They have a better record than the Cubs. It's all very confusing, because this team is supposed to be bad, and lose nearly 100 games.

But don't worry. This team is bad. Like really bad. It's just benefitting from a pitching staff that's pitching way over its head right now. I mean, think about it. Carlos Rodon is yet to throw an inning this season, and Jose Quintana looks like shit, yet the White Sox currently have the second best ERA in baseball at 2.71, trailing only the Minnesota Twins.

But do you know why the Twins have the best ERA in baseball?

Because they've played six games against one of the worst offenses in baseball: the Chicago White Sox.

At some point, the pitching is going to even out, as is the offense, but the offense won't get much better. The pitching can be a lot worse.

We have visuals to support the idea that Avisail Garcia has changed his swing. I wrote about it last week, and Avi is still hitting the shit out of the baseball. Avi currently leads all of baseball with a .465 batting average, is second in OBP at .511, and is in the top 10 in slugging at .674. His OPS of 1.185 is the fourth-highest in baseball, behind such luminaries as Eric Thames, Zack Cozart, and Marcell Ozuna.

And the biggest reason for the change is not just that he's hitting the ball hard, but that he's elevating the baseball too. Just look at these graphics showing Garcia's launch angle in 2016 compared to 2017 and you can clearly see he's doing a much better job of getting the ball in the air.

Again, when it comes to Avi, I'm still hesitant to fully buy in, but it's not just that he's doing really well right now, it's that he's doing it in a way we've never seen from him before.

And then there's Jose Abreu. Remember last season when Abreu got off to a horrible start, and then had a fantastic finish to the season once his son arrived from Cuba? Remember how we then convinced ourselves that the Abreu we saw at the end of the year would be the one we saw in 2017?

It's still really early but Jose has not looked good at all at the plate. He's yet to hit a home run and has only one extra-base hit on the season. This early in the year I'm not sure there's really any one thing to pin it on, but the facts of the matter are that his current strikeout rate of 26.1% is easily the worst of his career, as is his walk rate of 4.3%. He also has a BABIP of .258, which is very low for him. The worst BABIP he's ever had in any season was the .327 he posted last year.

Abreu's hard-hit rate is at 29.2%, which is below his career rate of 34.2%. It's something we may want to keep an eye on because it's been an alarming trend in Jose's career.

David Robertson looks phenomenal. There's been a lot of cold water being dumped over your head in this post, so I want to end on a high note. Robertson's been fantastic. He's looked like the untouchable version of David Robertson we saw all those years in New York and in his first season with the White Sox.

Now, the K-rate of 62.5% isn't going to continue, but his stuff just looks as sharp as ever, and the control has been pinpoint.

Look around the league at all the teams currently having bullpen problems. This is looking like it could be a very good year to have a really good closer available via trade. The White Sox won't get an Aroldis Chapman or Andrew Miller-like return on Robertson, but if he's pitching like this, they'll get something really good.

Something better than they could have gotten over the winter.
Avisail Garcia Carlos Rodon David Robertson Derek Holland James Shields Jose Abreu Jose Quintana The Week That Were In White Sox