Odds Are Jose Quintana Won't Be Traded To The Cubs 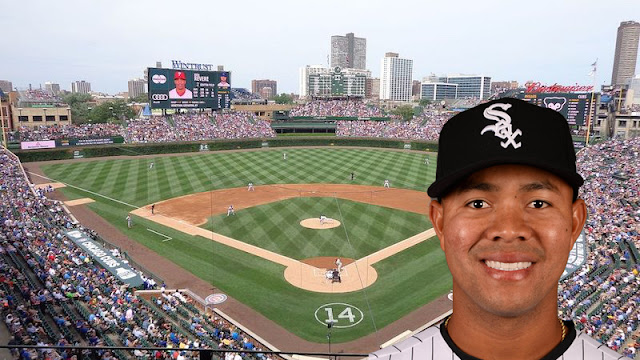 Does that make sense?

Just in case it doesn't, maybe I should explain further. You see, there's been some recent scuttlebutt across town about the White Sox possibly trading Jose Quintana to the Cubs for a boatload of prospects. The theory is that the Cubs have been looking for a starting pitcher with years of control for a while now, and the slow start to the season might accelerate their search for one. The White Sox happen to have one of those available in Jose Quintana.

The White Sox are looking to trade Quintana for prospects to help their rebuilding efforts, and the Cubs certainly have prospects.

So, you see, on the surface it makes sense.

As is usually the case when it comes to trade possibilities between the White Sox and Cubs, the local media is preparing their takes on it. Most of those takes involve the White Sox -- particularly Jerry Reinsdorf -- not wanting to help out the Cubs in any way.

And that makes sense as well.

After all, there were reports over the winter that the Sox wouldn't even consider trading Chris Sale to the Cubs, and as I wrote at the time, that made sense. Chris Sale is the face of your franchise, so it's only logical that if you're going to trade him, you'd rather not trade him to the team you share a market with. The one you're in direct competition with. Not even from a strictly business sense, but just to be empathetic with the fan base that's been kicked around quite a bit for most of the last decade.

For what it's worth, however, Theo Epstein told 670 The Score on Thursday morning that he did talk to Rick Hahn about Chris Sale. It's just according to Epstein the conversation lasted 30 seconds once he heard what the Sox wanted in return. It was a lot, and that made sense too. Just look what they'd later get from Boston for him.

Anyway, after seeing that, and just paying attention to how both teams have operated for years within the same city, it makes sense to think there's a resistance on the White Sox part to deal with the Cubs. Which is why it made sense that Rick Morrissey wrote a column saying as much, even if not all of Morrissey's column made sense (at one point in the column Morrissey says the White Sox told him they would trade Quintana to the Cubs, which feels like a strange thing to include in a column in which you're trying to say that they won't).

But do you know what else makes sense? That there's been a change of heart on the south side and that Reinsdorf would be perfectly willing to trade Quintana north.

First of all, as good as he is, Quintana isn't Sale. He wasn't the face of the franchise. He wasn't the guy selling tickets like Sale starts did every fifth day. It wouldn't hurt Sox fans to see Quintana at Wrigley like it would seeing Sale in Cubs pinstripes.

Second, of all, things have changed. I never thought Reinsdorf, at 81 years old, would consider tearing it down and starting over. Yet there the Sox were trading Sale and Adam Eaton for a bunch of prospects, starting a rebuild. Here they are now looking for the right return for Jose Quintana, and any other veteran that isn't nailed down.

The Cubs winning the World Series no doubt played some kind of role in this change of heart, and now that the Cubs have won, Jerry really doesn't have anything to lose. They already dominate the city, so it's not as if trading Quintana to the Cubs would hurt his bottom line.

Trading Quintana to the Cubs makes sense if you get the return you're looking for.

There are a lot of things about a possible trade between the Cubs and White Sox that make sense, but the one thing that needs to make the most sense is the return for both teams, and I just don't think the Cubs have enough prospect depth at this point to get Quintana. Most of their top prospects are currently on the Major League roster, and while Eloy Jimenez and Ian Happ would make enticing centerpieces of a Quintana trade, there isn't a whole lot left behind them at the moment.

So the Sox would likely want somebody from the Major League roster to complete the deal, and that doesn't make sense for the Cubs. Sure, Javy Baez might be expendable in a trade if you have Happ in the wings behind him, but it doesn't if you're trading away both Baez and Happ.

At this point, it is far more likely that the White Sox would trade somebody like Derek Holland to the Cubs or a bullpen arm than Quintana.