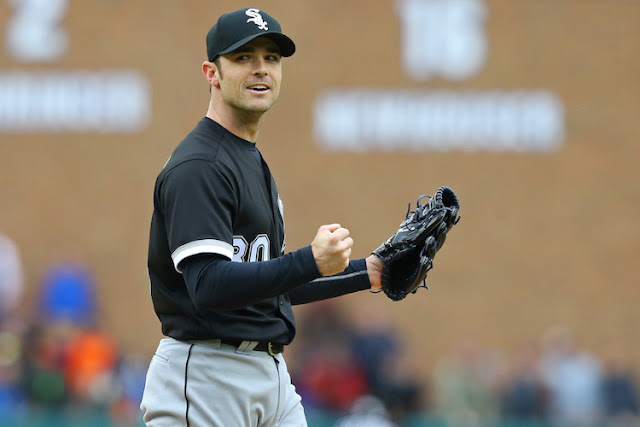 This is the first in (what I plan on making) a series of posts about individual players and how their markets are shaking out. We're going to start with White Sox closer David Robertson.


HOW IS HIS STOCK?
It's better than it was over the winter. While the White Sox wouldn't have minded moving him before the season began, the interest just wasn't high enough, and that's worked out well for the Sox.

Robertson finished last season with his lowest K/9 since 2013 and his lowest K-rate since 2010. Making matters worse, he was walking hitters more often, as both his BB/9 and BB-rate were the highest they had been since 2011.

That's changed this year. Robertson's striking out hitters at a better rate than at any point previously in his career, and his walk rates have returned to their norms.

In other words, he looks like the pitcher the Sox thought they were getting when they originally signed him, and like the kind of pitcher other teams wouldn't mind having at the back of their bullpens, whether as a closer or an eighth-inning setup man.


TEAM THAT MAKES THE MOST SENSE
It's the same team that's made the most sense for Robertson since the Sox decided to blow this thing up in the winter: the Washington Nationals.

Washington doesn't have a need for Robertson in the regular season. As I write this, the Nats have a nine-game lead over the Braves in the NL East, and I don't see the Braves mounting any credible charge.

Still, Washington's bullpen has been a tire fire of epic proportions this season, as even guys like Matt "Fucking Like A Cat" Albers has had to be relied upon to get saves this year. Shit, things are so bad that Washington is kicking the tires on Francisco Rodriguez of the wondrous 89mph fastball and 9.6% swinging strike rate. I'm sure that will work out well.

How much longer the Nats plan to dance around Robertson instead of making a real push for him, I don't know. I figure that after giving up so many of their top prospects in the Adam Eaton deal they may be a bit hesitant to pay a premium price for a closer, but considering that closer might be the key to them reaching a World Series, it's something they should consider.

While the White Sox aren't going to get Victor Robles for Robertson, it's possible they could get someone like Juan Soto. I'd do Soto and another prospect for Robertson.


IF WASHINGTON FALLS THROUGH
Should Washington decide to do nothing or go in another direction, I believe the next logical landing spot for Robertson would be with the Dodgers. The Dodgers are in the midst of a three-team race in the NL West, though all three teams are likely to make the playoffs.

When it comes to the Dodgers, though, we know that only making the playoffs won't be enough. They want that elusive World Series.

So even with Kenley Jansen at the back of the pen, the Dodgers could be looking to lock up the eighth inning as well, and that's where Robertson would come in.

The player I'd target is Alex Verdugo, who could probably play in Chicago this season if there's room cleared up for him in other trades. The Dodgers do love their prospects, though, so it remains to be seen what they'd be willing to give up. I do think Verdugo and a lottery ticket is a fair ask, however.

Think of it this way: if you're a team looking to earn a playoff spot this season you're always in the market for more bullpen help. So when thinking of teams that might be interested in Robertson, here's a list: Yankees, Red Sox, Rays, Twins, Rangers, Angels, Mariners, Diamondbacks, Rockies, Cubs and the Brewers. And that list doesn't even include teams that aren't in it but are delusional enough to believe they are.

Now, how interested any of those particular teams would be varies, but there should be plenty of interest for Robertson this month.

WHERE IS ROBERTSON ON AUGUST 1?
I'm going to say the Nationals because they do make the most sense, and I think they're going to be the most motivated to add Robertson ahead of the deadline. Even if it isn't Washington that trades for him, the odds of Robertson still being a White Sox after the deadline are extremely small.
Adam Eaton Alex Verdugo David Robertson Francisco Rodriguez Juan Soto Kenley Jansen Trade Rumors Victor Robles