I'm Not Sure Why Kevan Smith Gets So Much Playing Time 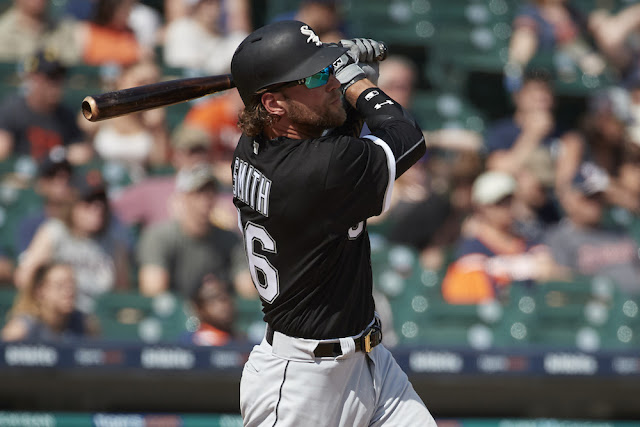 My girlfriend is in love with Kevan Smith.

All right, love might be a strong word. In truth, she’s more in lust than anything. Anytime we’re watching a game together and Smith shows up on the screen there is a visceral reaction within her.

I haven’t seen her this excited about a White Sox player since Carlos Quentin was wiggling his ass in the batter’s box.

None of this is the reason I want to see Smith playing less often than he already is, but it would be a bonus.

I’ve mentioned this on Twitter more than once, and I figured it was time to actually write a post about it because A) I haven’t written anything here in a while, and B) seriously, why the hell is Smith getting so much playing time?

Geovany Soto last played for the White Sox on May 7 since going down with an elbow injury that I’m guessing will cost him the rest of the 2017 season. Since then Smith has started 16 games for the White Sox. Omar Narvaez has started 13 games since Soto’s injury, and that includes three starts before Smith got his first one.

So what’s the damn deal? Why is Kevan Smith starting more games than Narvaez?

The only logical reason I can think of is that Smith is a better framer than Narvaez. Of course, even if that’s the case, I feel the need to point out here that so far this season Narvaez’s framing numbers have been awful. Smith’s have just been bad. It’s not that he’s good at it, it’s just he’s not as bad as Narvaez.

And I’m not going to question the value of a good framing catcher behind the plate, but there comes a point where you have to wonder just how much value it actually has. The truth is, if Smith is stealing more strikes for White Sox pitchers, it’s not showing in the results to this point.

Here is how Sox pitching has fared with both catchers behind the plate so far this season (sample size, yadda yadda)

So while Smith is better in some areas, he’s been worse in a lot of spots that matter most.

Now let’s look at them as hitters.

Omar Narvaez is not a good hitter. At least, not when it comes to actually hitting. He’s a great batter, though. Only Melky Cabrera strikes out less often, and nobody on the team has a higher walk rate than Narvaez. Not even Todd Frazier who leads the team in walks by a couple of miles. Speaking of Frazier, while he leads the team in pitches per plate appearance (4.5), Narvaez isn’t all that far behind at 4.23.

He just gives you good at-bats and puts the ball in play more often than not.

The problem is that when he does put the ball in play there isn’t much happening. I mean, we’re talking about a guy with an OBP of .352 and a slugging percentage of .269. The difference between those two numbers is comical. I’d call Narvaez a singles hitter, but that feels somewhat insulting to singles. He’s more of a ball-slapper.

Still, even if that’s the case, he’s been better offensively than Kevan Smith has.

Also, while Narvaez is very patient and walks more often than anybody on the team, Kevan Smith’s next walk will be his first. Not just of this season, but of his Major League career. That’s right, Kevan Smith has come to the plate in the bigs 84 times in his career and is yet to draw a single walk. He has struck out somewhat often, though, as he has a K rate of 21.4%. Not awful, but still a lot more often than Narvaez.

Finally, we mentioned how Narvaez sees 4.23 pitches per plate appearance. Well, Smith’s at-bats are significantly shorter, as he’s seeing 3.47. Only Leury Garcia and Avisail Garcia see fewer pitches. Of course, they manage to hit the ball while up there.

So essentially, both catchers are the same guy in the batter's box that they are behind the plate. When it comes to Narvaez, there are going to be more walks and fewer strikeouts, and not a lot of extra base hits. With Smith, there are more strikeouts, fewer walks, and big hits.

None of this is to say that Smith shouldn’t be playing. I’m not here trying to tell you that Omar Narvaez is a significantly better player than he is and that he should dominate playing time.

But Narvaez should be playing more often than Smith does. Smith should be the clear-cut backup in that sense, whether that means he gets starts against lefties and in day games after night games or whatever, I don’t care.