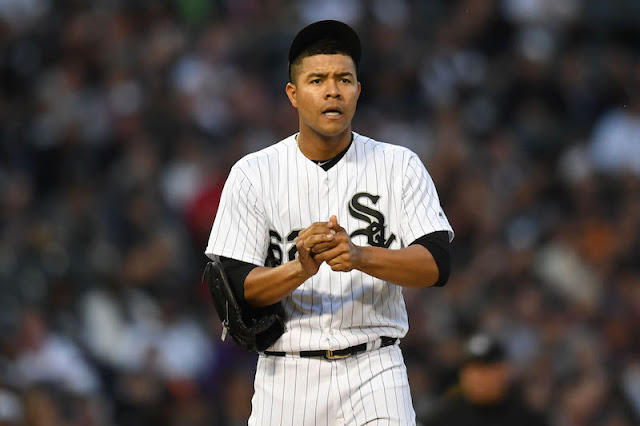 Today we look at the player whose trade stock we've spent all season (as well as the offseason) thinking about: Jose Quintana.

It's doing rather well, and I don't think it's just because he seems to have turned a corner in his last few starts. The truth is, while we may have been gnashing our teeth over his trade value while he struggled, I don't think other teams suddenly saw his worth taking a nosedive.

Jose Quintana remains a very good pitcher on an extremely friendly contract. I don't think he's the kind of pitcher you would build your entire rotation around, saying "this is our ace," but I can't help but believe that if he's your No. 2, then you're in a strong position. Especially in the playoffs.

Then there's that contract. Oh, that contract. If you keep Quintana through the end of it, you will get quality pitching for 3.5 seasons at the low, low price of (roughly depending on remaining 2017 salary) $34.35 million. For his production that's a fantastic price.

You'd have to be stupid not to trade for him!


TEAM THAT MAKES THE MOST SENSE

Before the season began the most obvious choice for a team that would trade for Q was Houston. The Astros believed they were a contender, but there were some questions about their rotation, and adding Quintana to it would have solidified it in theory. Well, it's nearly July and Houston currently has a 12.5 game lead in the AL West, and its starting pitchers have the fourth-lowest ERA in baseball at 3.84. So even if they might still be in the market for a starter, and may like Quintana, I don't think he's as pressing a need for them.

The team that makes the most sense right now in my eyes is the Yankees. Before the season started, the Yankees were looking toward the future, building around a lot of young talent the organization had accrued through the draft and by trading some veterans. While they weren't tanking or anything, I don't know that the Yankees entered 2017 thinking they were going to be as good as they have been to this point.

And they've been quite good.

The problem is that while they have the second-best record in the American League right now, they're still tied with the Red Sox for first in the AL East. With the new playoff format winning your division is more important than it had been recently, and that's the clear goal for New York going forward.

The team's starting pitching hasn't been bad by any means. The ERA of 4.07 ranks 10th of all starting rotations in baseball, but when you look at what the Yankees have, it's hard to find the ace.

Luis Severino has been fantastic, but Masahiro Tanaka -- the guy who is supposed to be that ace -- has been bad. His peripherals suggest things might not improve much, either. After that, you have guys like Jordan Montgomery and Michael Pineda. Pitchers that are capable of putting together a great start, but neither have that top-of-the-rotation feel. Like, how confident are you if Pineda or Montgomery are starting a Game Five or something?

Also helping the Yankees is that while a lot of teams would love to have Jose Quintana, there aren't many who have the prospect depth to acquire him. The Yankees do, as they currently have eight prospects ranked in MLB Pipeline's Top 100.

As for which ones they'd be willing to give up for Quintana, I don't think Gleyber Torres would be on the table, so I imagine any package starts with Clint Frazier and goes from there. I could see something like Frazier, Dustin Fowler and a pitcher working for both sides.


IF THE YANKEES FALL THROUGH

If not the Yankees the Astros would still be in consideration, but I think the Dodgers might be more inclined to make a move. They're in the midst of what looks to be one of the tougher divisional races in baseball this season, and even if their starting pitching has been excellent overall, it's Clayton Kershaw and Alex Wood carrying a lot of that weight. Kershaw's brilliant, but I don't know if I trust Wood to keep performing like this all season.

Then there's Brandon McCarthy, who has also pitched well, but is still Brandon McCarthy and seemingly on the disabled list every other 10 days. The Dodgers are going through starters like crazy, and while some of this is just roster manipulation and taking advantage of the new 10-day disabled list, I think they'd like something a bit more consistent to add to the rotation.

And that would be Quintana.

The question here is what could the Sox get in return. The Dodgers didn't want to trade Cody Bellinger over the winter, and there's no way in hell they'd do it now. Julio Urias is another one of their top prospects, but he's about to undergo career-threatening shoulder surgery, so I don't see the White Sox being all that eager to take him on.

So I would think that at this point the Dodgers would have to part with Yadier Alvarez, Alex Verdugo and more to get Quintana, and I don't know if the Dodgers would do that. They value the hell out of their prospects, which makes all the sense in the world, but I also wonder if they care about them too much considering they print their own money.

The Atlanta Braves could come calling again. They were snooping around over the winter, and even if they don't appear to have a realistic shot of making the playoffs this year, I don't think that interest has subsided.

There's also the Colorado Rockies. They have one of the top farm systems in MLB, and they're fighting with Arizona and the Dodgers in the NL West. They're also falling behind a bit, and a big reason for it is because they don't have the pitching. They're the Rockies; they never have the pitching. Maybe they believe getting Quintana could be the thing they need to win in October.

After that, has anybody considered the Brewers? Milwaukee is in its own rebuild, and it's ahead of schedule, so I don't know how serious the Brewers will be when it comes time to buy. That said, if the Brewers were going to make a big splash move, wouldn't getting a cost-controlled pitcher to put atop the starting rotation be the kind of move that makes the most sense for them?

Oh, and the Cubs. The Cubs will probably be interested too, but all trades between the Cubs and Sox are overly-complicated, so I don't put a ton of stock in that working out.

WHERE IS QUINTANA ON AUGUST 1?

I think he's with the Yankees, and if not in New York, then somewhere else outside of Chicago. It's entirely possible that Quintana could stay here all season and then the Sox try to move him this winter, but I think that if he had his druthers, Rick Hahn would move him this summer.

Having Quintana here any longer could lead to the team winning more games than it wants to. Plus, his value might not get any higher than it already is, and you don't want to risk an injury, or to see him return to his April and May form.
Alex Verdugo Clint Frazier Dustin Fowler Jose Quintana Rick Hahn Trade Rumors Yadier Alvarez