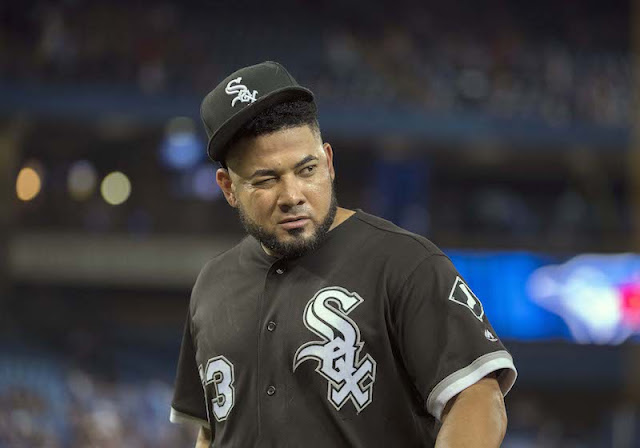 I don't think the White Sox would mind moving Melky Cabrera in a deal this summer, but how much interest will there be in the human gif machine?

It's improving, but it's not high. Melky's 2017 season got off to a horrible start, but he's turned things around in the last month and a half. Following a 7-6 loss to the Angels in Anaheim on May 16 Melky was hitting .233/.283/.308, and it looked like we were all in for a long last season for him in Chicago.

I just don't know how appealing that is.

Melky's arm in left field has been good enough to throw plenty of people out, but there's a reason teams continue to test him. He's just not a great outfielder, nor is he a strong enough hitter to be somebody you'd want as your designated hitter. So it's hard to find a place that makes a lot of sense for him.

Also, as a player making $15 million in the final year of his deal, I don't know how much any team would be willing to part with to add him.

TEAM THAT MAKES THE MOST SENSE

There aren't a lot, but while trading within the division is something that happens with less frequency, I see the Royals as one of the few teams that would consider Melky a definite upgrade.

Now, I don't believe the Royals are a team that's going to compete for a playoff spot this season, but they may feel differently. I get why because they're currently a game under .500, yet only 2.5 games out of first place.

I just don't know if the Royals would be willing to bench Gordon for Cabrera.

I also don't know if the Royals would want to pay Gordon $16 million to sit on the bench while paying for the rest of Melky's contract. If this were to happen, the White Sox would have to pay some of Melky's salary, if not most of it. At least doing so would increase the return.

As for the return, Kansas City doesn't have a stacked system, but I don't think you'd get much for Melky from anybody anyway. Maybe somebody like Josh Staumont, who has a big fastball and little to no control.


IF KANSAS CITY FALLS THROUGH

While I called the Royals the team that makes the most sense, it doesn't necessarily mean they make a lot of it. If the Royals don't happen, there aren't a ton of obvious options past them.

There have been reports that the Cardinals have shown interest in outfielders like J.D. Martinez and Avisail Garcia, so I suppose it's possible Melky could interest them.

I don't see it being an obvious fit, however, because the Cardinals haven't gotten horrible production in left field this year. They're more in a position that they want a clear offensive upgrade, and I don't know if Melky indeed provides that for them.

The Rockies haven't gotten much production from their left fielders, but I don't think they'll be looking to boost the offense at the deadline. Offense comes naturally in Coors Field, and on the other side of the coin, Melky Cabrera roaming that gigantic left field could be a disaster.

Maybe the Blue Jays, Diamondbacks, or -- gasp -- possibly the Cubs?

WHERE IS MELKY ON AUGUST 1?

I'm fairly confident he'll still be a White Sox. I just feel like if Melky's going to be traded this season, it is more likely to happen in August via waivers.

I would fine with that if it's the case. I love Melky. He's one of my favorite White Sox players of the last decade. I wouldn't be upset if he's here the rest of the season and then just walks in free agency, but I also wouldn't mind opening a spot in the outfield for somebody else this season.
Alex Gordon Avisail Garcia Melky Cabrera Trade Rumors