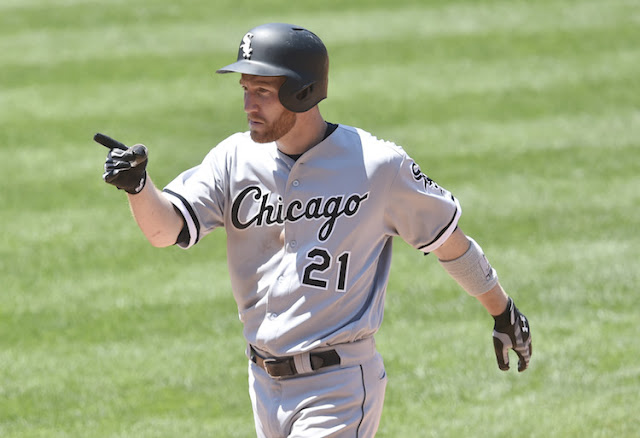 One player the Sox will be looking to trade this month is third baseman Todd Frazier, but how successful are they going to be doing so? Let's figure it out.

Not great! Frazier hasn't lived up to expectations since the White Sox sent Micah Johnson, Frankie Montas, and Trayce Thompson to the Dodgers as part of a three-team deal to get him. The good news is that none of those three has amounted to much, though the Dodgers were able to flip Montas to Oakland as part of a deal that landed both Rich Hill and Josh Reddick.

Anyway, while Frazier hit 40 dingers last season, that's about all he brought to the table. Well, that and above average defense, but not too far above average. He also struck out a ton while hitting .225/.302/.464. This year he's cut down on the strikeouts and is walking more often, but his slash line still resides at .211/.317/.417. Oh, and the dingers have disappeared.

Okay, they haven't completely disappeared, but after homering in 6% of his plate appearances last season that number is down to 4.5% this season. He's also not hitting for extra bases at the same rate.

So, you know, he's in the decline phase of his career.

The good news is that, no matter what, the Sox aren't tied to him after the 2017 season, but they wouldn't mind ending the relationship before that.


TEAM THAT MAKES THE MOST SENSE

The market for Frazier isn't robust, but if there's any team that sticks out as an obvious target, it would be the Red Sox.

Boston third basemen have combined for a .247 wOBA and a wRC+ of 43. Both numbers are the worst in baseball, and by a rather wide margin at that.

Boston also finds itself in the midst of a division race with the Yankees in the NL East, and we know that this is a team that would like to win this year as well as next year and the year after that. So Frazier seems like an obvious upgrade for them, but he's not going to be their first choice. That would be Kansas City's Mike Moustakas who has been better than Frazier in just about every facet this season. He's also a free agent this winter which means that while he might cost more than Frazier, it won't be too much more.

As for what the White Sox could get from Boston, don't expect much. If somebody suggests Rafael Devers slap them. I'd imagine the Sox end up with a prospect with one plus tool and a whole lot of problems to work on. Somebody like first baseman Josh Ockimey.


IF BOSTON FALLS THROUGH

I think the team that makes the most sense after Boston is the team Boston's competing with: the Yankees. Saying that I'm not sure how interested the Yankees would be.

First of all, I think they'd rather address their starting rotation before anything else. Obviously, the White Sox can help them there as well, but that's for another post.

If the Yankees did want an upgrade at third, like Boston, I think they'd much prefer Moustakas. Because even if Chase Headley isn't lighting the world on fire, Frazier's barely an upgrade offensively.

He is a better third baseman, though, so maybe that would be enticing to the Bombers?

Like Boston, if the Sox did trade Frazier to the Yankees by himself, I wouldn't expect anything exciting in return. Maybe somebody like Jorge Guzman, who has a tremendous fastball and very little control to go with it.

It's so hard to say. It's possible that teams like Angels and Rays could be interested, or perhaps the Cardinals. Everybody else that's a contender is pretty set at third.

The Rays are set at third too, but it's possible they could have some rotation between third, first and designated hitter with Evan Longoria, Logan Morrison, and Frazier.

As I said earlier, it's a thin market for third basemen this summer, particularly if the Royals make Moustakas available, and they really should. So maybe we should hope the Royals get hot and decide to make one last run before blowing it all up.


WHERE IS FRAZIER ON AUGUST 1?

I think he's still with the White Sox and becomes a candidate for a waiver deal. It's possible things will open up with an injury somewhere, but as for right now I just don't see the demand for Frazier.
Chase Headley Mike Moustakas Todd Frazier Trade Rumors